Designed by architect Zachary Taylor Davis and originally funded by baseball executive Charles Weeghman, Wrigley Field first opened its doors in 1914. Known as Weeghman Park, it was renamed Wrigley Field in 1918 after chewing gum magnate William Wrigley Jr. of the Wrigley Company, who went on to acquire complete control of the Chicago Cubs in 1921.

When the park was first built it held 14,000 people and it has been through several renovations over the years, allowing it to hold over 41,000 visitors today. The park is situated in the North Side community area of Lakeview in the Wrigleyville neighborhood, on an irregular block bounded by Clark (west) and Addison (south) Streets and Waveland (north) and Sheffield (east) Avenues, and follows the traditional jewel box design of ballparks that was popular in the early part of the 20th century.

Another unusual feature of this historic venue is that the dimensions of the park have remained largely unchanged since 1937. It is also known for being the last Major League Baseball stadium to have lights installed for after-dark play, finally lighting the stadium in 1988. Despite being steeped in tradition, Wrigley Field is a fully up-to-date stadium venue, providing the very best in entertainment, whether it be baseball, football, soccer, hockey, or music concerts. 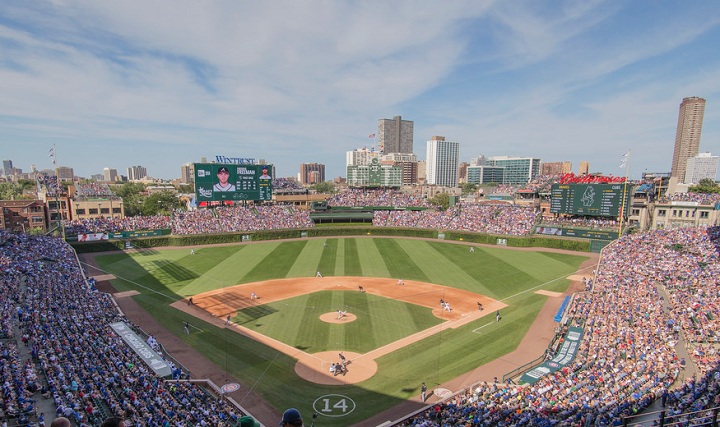 For ticket information and information on our ticket provider please see the Wrigley Field tickets page.

For seating chart configuration and find out about accessible seating, please see the Seating Chart page.